Sarah Stroud joined the department in 2018. She was previously Professor of Philosophy at McGill University, where she taught from 1993 to 2018. She holds degrees from Harvard (A.B.) and Princeton (Ph.D.). She works across central areas of moral philosophy, with a particular focus on foundational issues in moral psychology and moral theory and on the intersection of such issues with metaethics and the philosophy of action. She has published papers on such topics as partiality, moral demandingness and overridingness, lying and testimony, practical irrationality, and the moral implications and significance of personal relationships. She co-edited Weakness of Will and Practical Irrationality (OUP, 2003) and the International Encyclopedia of Ethics (Wiley-Blackwell, 2013). Rob Willison  (PhD 2017, University of Pennsylvania) is Research Assistant Professor of Philosophy and Associate Director of the Parr Center for Ethics. He joined the department in 2017. He is working on the ethics of meaning—a study of the ways that meaning and interpretation, understood as practices, can help and hinder us in our efforts to live well together. He has research interests in social and political philosophy, philosophy of education, philosophy of social science, philosophy of art, and the history of American Pragmatism. Steve received his PhD from the University of Nebraska in 2011; prior to joining UNC, he was a lecturer at the University of Nebraska, and the Assistant Director of Nebraska’s Robert J. Kutak Center for the Teaching and Study of Applied Ethics. Steve’s primary research focus is in moral psychology, exploring the viability of anti-Humean views of human motivation that posit besires—beliefs and perceptual states that are capable of being intrinsically motivating. Steve is also interested in issues in political philosophy and the philosophy of law regarding social perceptions of criminality and various official and unofficial penalties (such as the loss of voting rights) that frequently accompany criminal convictions.

Alex holds an M.A. from the University of Tennessee, Knoxville, where he is also a Ph.D. candidate in Philosophy. His interests are in moral, social, and political philosophy. His dissertation (currently in progress) focuses on the nature of political resistance and its relationship to democratic ideals of civility. As an extension of his commitment to student-centered pedagogy, Alex is enthusiastic about making philosophy accessible and engaging, and is particularly interested in bringing philosophy to new and often non-traditional audiences. This informs his work on the NHSEB program and other outreach initiatives, as well as his research and teaching more generally. Sally received her BA in Philosophy with a minor in Cognitive Science from the University of North Carolina at Chapel Hill. She joined the department shortly after her graduation in 2017. Her interests include practical ethics, metaphysics, and the bridge between psychology and philosophy of mind. 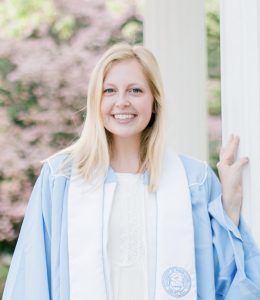 Jordan received a BA in Economics and Political Science with a minor in History from UNC-Chapel Hill in 2019. She is now working as the Events Coordinator for the Department of Philosophy, Parr Center for Ethics, and PPE Program. Jordan is particularly interested in the philosophy of politics and law, and she is excited to learn more about these fields while working alongside the wonderful staff and faculty in the department.

Marina is a graduating senior at UNC with a BA in English and Slavic Languages and Cultures, with a minor in Creative Writing. She was a Parr Center Undergraduate Fellow for 2.5 years before joining the Center full-time in 2020. She is currently writing her senior honors thesis in poetry.

Karl is a fourth-year graduate student. He has two primary areas of philosophical interest. The first is moral and political philosophy broadly construed and the history thereof. The second is the philosophy of science, especially the social sciences (which he takes to include history) and biology.

As an undergraduate he triple majored in philosophy, anthropology, and history, and often tries to bring a comparative and historical perspective to bear on discussions in contemporary Western philosophy. When not reading, thinking, or talking about philosophy, he can usually be found absorbed in a book of some kind, debating with someone, or spending time with his wonderful family (which happily often also involves reading or debating philosophy and other topics).