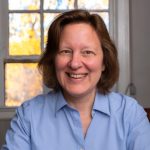 Sarah Stroud joined the Department of Philosophy and the Parr Center in 2018. She was previously Professor of Philosophy at McGill University, where she taught from 1993 to 2018. She holds degrees from Harvard (A.B.) and Princeton (Ph.D.). She works across central areas of moral philosophy, with a particular focus on foundational issues in moral psychology and moral theory and on the intersection of such issues with metaethics and the philosophy of action. She has published papers on such topics as partiality, moral demandingness and overridingness, lying and testimony, practical irrationality, and the moral implications and significance of personal relationships. She co-edited Weakness of Will and Practical Irrationality (OUP, 2003) and the International Encyclopedia of Ethics (Wiley-Blackwell, 2013). 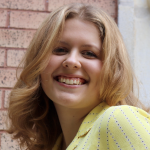 Juliana received a B.A. in Interdisciplinary Studies, examining the field of ‘Neurolaw’ at the intersection of philosophy, political science, and neuroscience. She joined the Parr Center her senior year and served on the Carolina Forum for Ethics ‘pod’ in the Undergraduate Fellowship. Her interests lie in the roles of rehabilitation versus incarceration, as well as mental health and prison reforms. She is excited to continue the exploration of ethics with the Parr Center family. 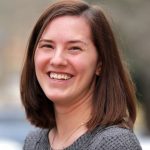 Sally received a B.A. in Philosophy with a minor in Cognitive Science from the University of North Carolina at Chapel Hill in 2017. Shortly after, she joined the department as the Parr Center’s Administrator. Sally transformed the Parr Center Undergraduate Fellowship and then transitioned into her current role as Director of Undergraduate Programming in 2019. When not in the Parr Center, Sally can be found in the UNC School of Government, completing coursework for the Master in Public Administration program. She will graduate with an MPA in Spring 2023. 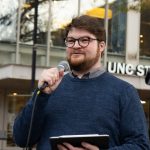 Alex works at the intersections of ethics, political philosophy, and the philosophy of education. He is an award-winning teacher and a strong advocate for public and pre-college philosophy pedagogy. Alex’s philosophical work focuses on the liberal virtue of civility, and its role in the non-ideal politics of democratic societies like our own. He received his Ph.D. from the University of Tennessee, Knoxville in 2021. 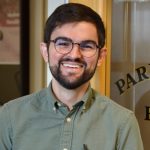 Michael received his PhD in Philosophy from the University of Pennsylvania in May 2020 and completed the post-baccalaureate program in Classical Studies at the University of Pennsylvania in 2015. His research centers on Ancient Greek & Roman philosophy. He also has research and teaching interests in democratic theory, ethics, logic, and philosophy of education. Michael is committed to forging lasting, democratic, and collaborative partnerships between the academy and the community, and to cultivating the philosophical voices of people of all ages. You can find a copy of Michael’s CV here. You can learn more about Michael’s community engagement and public philosophy efforts here. 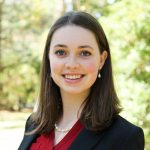 Delaney Thull is a fourth year Ph.D. student in the Philosophy Department at UNC. At the Parr Center for Ethics, she serves as a Graduate Assistant, working primarily on the National High School Ethics Bowl and teaching courses in practical ethics. She coached Carolina’s 2021 national finalist Intercollegiate Ethics Bowl team, has participated in local community outreach philosophy programming with both first graders and senior citizens, and loves thinking about ways to bring moral reasoning to life in the classroom. She completed her M.A. in Philosophy at UNC in 2021 and she graduated from Princeton University with an A.B. in Philosophy and a Certificate in Values and Public Life.